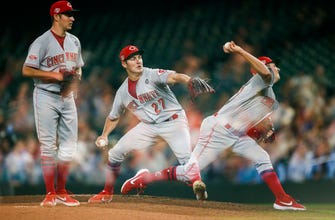 SEATTLE (AP) — Kyle Lewis homered for Seattle in his major league debut, Kyle Seager hit a go-ahead, two-run homer in the eighth inning, and the Mariners beat the Cincinnati Reds 4-3 on Tuesday night to stop a six-game losing streak.

Lewis, a 24-year-old outfielder selected 11th overall in the 2016 amateur draft, was brought up from Double-A Arkansas on Tuesday after hitting .263 with 11 homers and 62 RBIs. Batting sixth and playing right field, he grounded out in the second, then drove a high 2-0 fastball in the fifth into the Mariners bullpen in left for Seattle’s first hit off Trevor Braun. The drive, measured at 426 feet by Statcast, tied the score 1-1.

Lewis struck out leading off the seventh as part of a 1 for 3 night.

Seattle trailed 3-2 when Austin Nola was walked by Michael Lorenzen with one out in the eighth. Amir Garrett (4-3) entered, and Seager drove a hanging slider on Garrett’s seventh pitch over the right field wall.

Dan Altavilla (1-0) pitched around a leadoff walk in the eighth for his first big league win since May 18 last year against Detroit, and Anthony Bass tossed a perfect ninth for his third save,

Two other rookies homered: Cincinnati’s Brian O’Grady, who debuted on Aug. 8, put the Reds ahead 3-2 in the eighth with his first homer. O’Grady pinch hit and had a two-run homer off Austin Adams in O’Grady’s 21st big league at-bat,

Seattle’s Dylan Moore had given the Mariners a 2-1 lead in the sixth against Bauer with his eighth home run.

Mariners rookie Justus Sheffield allowed one run and seven hits in six innings, giving up an RBI single to Freddy Galvis in the second. Bauer yielded two runs and three hits in 6 1/3 innings.

Seattle turned double plays in four straight innings starting in the second. Sheffield started one of the double plays and also fielded a pair of comebackers.

Reds manager David Bell spent the off day Monday visiting old haunts and marveling at how Seattle’s changed in the nearly two decades since he was with the Mariners.

“I love the city,” Bell said. “It’s my favorite city — other than Cincinnati.”

“I think about him all the time doing this job,” Bell said. “I learned a lot from him I didn’t even realize while I was playing for him. . He had the ability to make every game like the seventh game of the World Series. He was a winner and he would not accept anything less from every person in the clubhouse than their absolute best every day. He had a way of motivating through his own expectations.”

In addition to Lewis, Seattle promoted Lewis, RHPs Justin Dunn and Art Warren, and SS Donnie Walton. Warren teared up in front of reporters while describing the clubhouse celebration in Arkansas when players received the news. OF Ryan Court was designated for assignment.

Reds: Nick Senzel (right shoulder) has not played the outfield since Sept. 3 but could pinch run. “We had to make a deal with him,” Bell said.

Mariners: Servais said SS J.P. Crawford (strained left hamstring) could return this weekend against the Chicago White Sox. … Rookie CF Jake Fraley (right thumb), who hasn’t played since Saturday, had an MRI on Monday but Servais said he did not have an update.

Read the original article at https://www.foxsports.com/ohio/story/mariners-beat-reds-4-3-091119