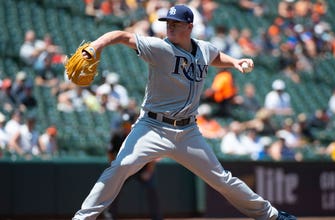 Why, that’s almost as improbable as the Orioles putting the clamps on a Tampa Bay offense that opened the series by scoring 16 runs.

Wilkerson hit a two-run homer in the seventh inning to back a surprisingly effective performance by Baltimore’s pitching staff, and the Orioles beat the Rays 2-1 Saturday in the opener of a split doubleheader.

One night after yielding 20 hits to the Rays, Baltimore permitted only three hits — all in the third inning. The Orioles came in with a major league-high 5.69 ERA and the worst record in the big leagues.

The loss ended Tampa Bay’s three-game winning streak and stalled their pursuit of the first-place Yankees in the AL East.

“It’s frustrating, but it’s a funny game,” Rays manager Kevin Cash said. “Sometimes that’s going to happen. Their guys executed pitches. Didn’t give us much. We didn’t even have that many opportunities.”

Picked up on waivers from Oakland on July 6, Aaron Brooks started for Baltimore and was followed by Jimmy Yacabonis with two outs in the third. Shawn Armstrong started the sixth and Richard Bleier (1-0) worked the seventh before issuing a leadoff walk in the eighth.

Mychal Givens came in and did not allow a base runner in securing his seventh save.

“It was a nice game of pitching,” manager Brandon Hyde said. “We did a really good job, played good defense — and Wilkerson with a two-run homer.”

After Mike Zunino greeted Yacabonis with a long ball in the third, the Rays held the lead until Anthony Santander singled to open the seventh and Wilkerson connected on a 2-2 fastball from Colin Poche (2-2).

Wilkerson put down the Rays in order in the ninth inning Friday night, no small feat for a utility infielder/outfielder. Just as impressive: Going deep against Poche.

“They’re both good for the memory bank,” Wilkerson said. “I’ll never forget either of those. I’ll take today’s over yesterday’s, for sure.”

“A cool accomplishment, something I’ll remember,” he said.

Added from Triple-A Durham as the 26th man for the doubleheader, Tampa Bay starter Brendan McKay allowed three singles over five shutout innings and struck out seven . It was the third career start for the lefty, the second in which he did not give up allow a run.

Drafted fourth overall in the 2017 draft, McKay faced the Orioles earlier this month — as a batter. Two days after making his big league debut on the mound against Texas on June 29, the 23-year-old two-way player went 0 for 4 versus Baltimore as the designated hitter.

McKay fared much better against the Orioles on the mound. He retired 12 of the first 13 batters he faced, then gave up two straight singles to open the fifth before working out of trouble.

This is the 30th doubleheader in Rays history, the third this season. Tampa Bay swept only four of its previous 29 doubleheaders and was swept 12 times. The Rays and Orioles have now played seven doubleheaders at Camden Yards. This one was created after a May 5 rainout.

Rays: 1B Ji-Man Choi (ankle) was reinstated from the injured list after the minimum 10-day stay. RHP Ian Gibaut was optioned to Triple-A Durham. … Reliever Chaz Roe (flexor strain) has been shut down from baseball activities. The team hopes to learn the extent of the problem after it returns home on July 19. … 2B Brandon Lowe (bruised shin) is still walking with a limp. … Matt Duffy (hamstring), who had a hit and three RBIs for Durham on Friday. The infielder will play several more games in the minors before being re-evaluated. … INF Daniel Robertson (knee) is recovering nicely from arthroscopic surgery and could begin a rehab assignment in the next week or so.

Orioles: RHP Dylan Bundy was placed on the 10-day IL with tendinitis in his right knee. Bundy (4-11, 5.28 ERA) gave up seven runs in the first inning of a 16-4 loss on Friday night before being pulled. Hyde hopes Bundy misses only one start. … RHP Nate Karns (forearm strain) gave up three runs in 2/3 innings of a rehab start with Class A Frederick on Friday night. “The velo is up, he feels good physically, the results just weren’t there for him,” Hyde said.

Read the original article at https://www.foxsports.com/florida/story/tampa-bay-rays-baltimore-orioles-score-recap-071319

2019-07-13
Previous Post: What’s next for the USWNT? NWSL is in full swing
Next Post: Cabal and Farah create men’s doubles history for Colombia